If you want to change the Wifi or network settings of your rabbit (after you have installed Open Karotz), here is what to do:

This is how it works.

Yesterday and today I spent some time figuring out how Python and the autorun of my rabbit works.

I wanted to create a USB key for the re-configuration of Wifi. I discovered how to use the Python file called "config.py", which is on the filesystem of the rabbit, and contains a lot of configuration options. It think that this file was used in the past, in combination with the USB cable and stand alone setup software, to do the initial setup.

It is however also possible to use config.py from a Python script and call the functions. This makes it possible to configure the rabbit with scripts.

This is how I did it. I created a plain autorun file with the following content:

This will just call autorunwifi, which is a Python script file, also on the root of the USB key.

I commented the sections in the script, and think it is more or less self explaining:

I did several tests, and it worked great.

Create a file with settings (network.conf)

(The files are also on Github) 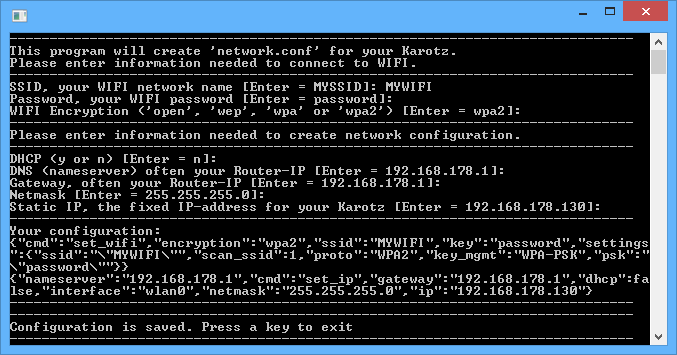 Wifi Configurator will let you create a network.conf file.